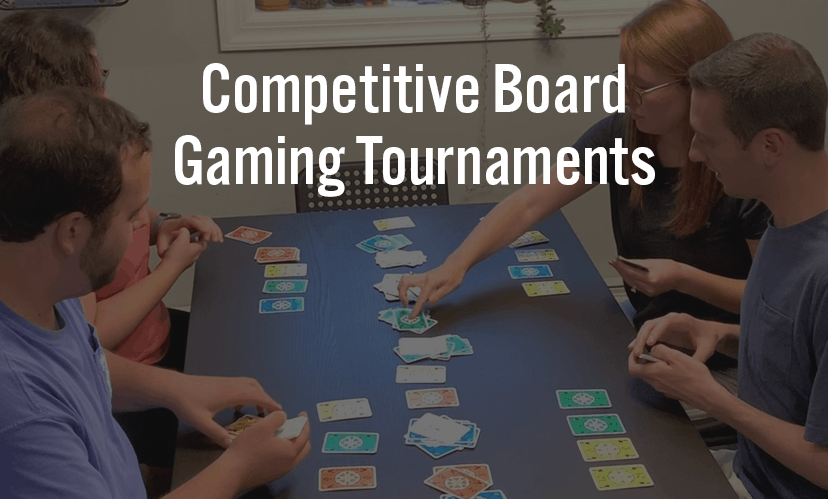 We often hear about tournaments and competitions for video games, but we rarely hear about any board game tournaments. They do exist, though! We’ll go over some awesome competitive board gaming tournaments that you should know about!

There are also efforts made to acknowledge some of the classic board games as sports. This started with the efforts to include chess in the Olympics, with the possibility of it being included in the 2024 Olympics.

In this article, we’re going to shed light on some of the largest formal and informal competitive board game tournaments in the world. We’ll also be talking about the games that flaunt the largest competitive scenes.

So, if you’re a pro and think you can compete with others in your favorite board game, this article is for you!

The Most Popular Competitive Board Gaming Tournaments

There are quite a few board gaming tournaments held around the globe. We created a list of the most recognizable board game championships or tournaments that a fan should know.

Some of these events can be considered professional tournaments, while others are intended to gather thousands of amateurs from around the world.

Since 1998, an annual Board Game Championship has been held in Germany. People from different countries had to travel to Germany to play in this championship.

Eventually, several countries started hosting their own tournaments for board games, which led to the emergence of the World Boardgaming Championship in 2002.

Now, more than 40 countries are participating in this championship. To qualify, you have to win the national championship in your country.

People from around the world gather up to compete for the title of champion of their favorite board games.

There are several board games played in the World Boardgaming Championship; around 160 games, to be specific. Here’s a list of all the games featured in the WBC.

PrezCon is one of the biggest board gaming events that has been held annually since 1994. Hundreds of people attend this convention from all over the world.

The winter board gaming convention hosts more than 100 tournaments of different board games. Their tournaments are scheduled with a track system to minimize overlapping tournaments on the same track.

The open gaming rooms carry more than 200 people playing games from a library of over 500 board games. Prezcon started hosting casual games too. Beginners are welcomed to play these games.

If you want to learn a new game, then casual games are for you. Someone will teach you how to play the game while competing with participants at the same level as you. You might win a prize as well.

The event includes 16 games, such as:

This is an international event that provides more than 60 different board game competitions. The competitions are based mainly on classic board games such as Chess, Go, and Scrabble.

There are also competitions for new games like Catan, Magic the Gathering, 7 Wonders, Carcassonne, and Ticket to Ride. Card games are included, too, like Poker and Bridge.

Gen Con is the largest annual convention for games in North America. It includes a variety of role-playing games, trading card games, miniature, and board games.

Gen Con Indy is held at the Indiana Convention Center.

What Board Games Are Played Professionally?

It’s difficult to take a board game as a career, as there aren’t many sponsors for board gamers. Besides that, the awards at the tournaments aren’t always money awards. Even if they give money awards, it’s not enough to be considered a source of income.

Board game associations and federations are trying to prove the importance of board games as mind sports so that they can be acknowledged by sponsors. We expect that, in the near future, board games will be viewed as sports and that sponsors will take great interest in them.

That said, there are a few board games that can be played professionally. By professionally, we mean that you can make money out of playing such games.

Below are some of the board games you can play professionally.

German board games tend to have simple rules and shorter playtime, which is exactly the case with Catan. The game emphasizes strategy and minimizes luck and conflict. It focuses primarily on economy rather than military themes and it keeps all the players in the game till the end.

No wonder this game is often used in tournaments!

Catan is played at almost all board game conventions and tournaments, including:

However, with Catan being a favorite for many tournaments, it’s not guaranteed as a job. Some of these tournaments don’t give money awards.

You can play it competitively and become the best player in the world, but it’s not guaranteed to be a reliable source of income.

MTG was first released in 1993 and became the very first trading card game. There are more than 20,000 different cards to build your deck with before playing.

About 20 million people play MTG around the world. The creators of the game made sure to make the game simple and relatively easy so all people can play it.

This game has its own tournament, known as Magic: The Gathering Pro Tour. The tournament was first held in 1996 in New York City. Its name changed in 2020 to Players Tour.

Unfortunately, the Players Tour and the Rivals League will be terminated. This means there will be no path to magic as a career anymore.

Go is known to be the oldest board game globally, and it’s still played in its original form. The game is popular worldwide, especially in China, Korea, and Japan.

It’s one of the board games that is played professionally. The reasons behind that are its simple rules and intriguing strategies.

If you love this game and you’re good at it, you can probably play it professionally and make a considerable amount of money out of it. There are many Go tournaments played nationally and internationally for professionals and amateurs alike.

There are several Go associations and federations around the world, including the Japanese Go Association, the European Go Federation, and the International Go Federation. Their role is to supervise the tournaments for both professionals and amateurs.

Here’s a list of the most famous Go tournaments in the world:

Monopoly is one of the most popular board games worldwide. Some countries even have their own version of Monopoly. Nearly everyone in this world knows how to play it. And guess what? Monopoly can be played professionally, too.

You might think that Monopoly is a luck game and that it can’t be played in tournaments, but if you’re a highly experienced Monopoly player, you know that Monopoly needs a combination of skills, strategy, and luck.

Many countries hold national championships for Monopoly, including the United States with the Monopoly US Championship.

The holder of the world’s best Monopoly player for 2015 is Nicolò Falcone from Italy. He’s waiting to defend his title in the next World Championship.

We can’t talk about board games that are played professionally and not mention chess. Chess is one of the oldest board games in the world. It’s widely popular and it’s hard to find someone who doesn’t know what chess is.

Chess has the reputation of being a game for the smart and strategic. Although the game needs high intelligence, it doesn’t solely rely on intelligence; it needs logic and good strategy!

For its high popularity and for being a sophisticated game, there are many tournaments for chess. There’s even a World Championship for chess.

Here’s a list of the most important tournament for chess:

This isn’t meant to be a complete list of all the tournaments for chess. But it’s just a way to show you how chess is important worldwide and one of the few board games that their players can live on.

Luckily for all the scrabble fans, it’s one of the games that is receiving worldwide attention. It’s currently played in several international tournaments.

The international tournaments are being organized and supervised by the World English Language Scrabble Players Association (WESPA). The most recognizable tournaments are:

The current best scrabble player is Nigel Richards as he is the only person to have won the title more than once.

Ticket to Ride is a game that relies on some luck besides knowing how to use the cards of the game. That’s why it’s included in nearly all the board gaming tournaments.

The game is played at:

There isn’t much information about the awards for the winners of Ticket to Ride. So, it’s not really guaranteed that it can be a source of income. However, it earned its place as a great competitive game.

Other board games that can be played professionally include:

Board games definitely need more attention and recognition from the world. Granted, there are quite a few national and international tournaments and championships revolving around board games, but they’re still not viewed as mind sports and are getting no attention from sponsors.

It all starts with us players, enthusiasts, and fans; we can help bring more awareness to board games and compel the world to acknowledge the importance of mind sports in general.

Hopefully, one day, board games will become an integral part of the Olympics