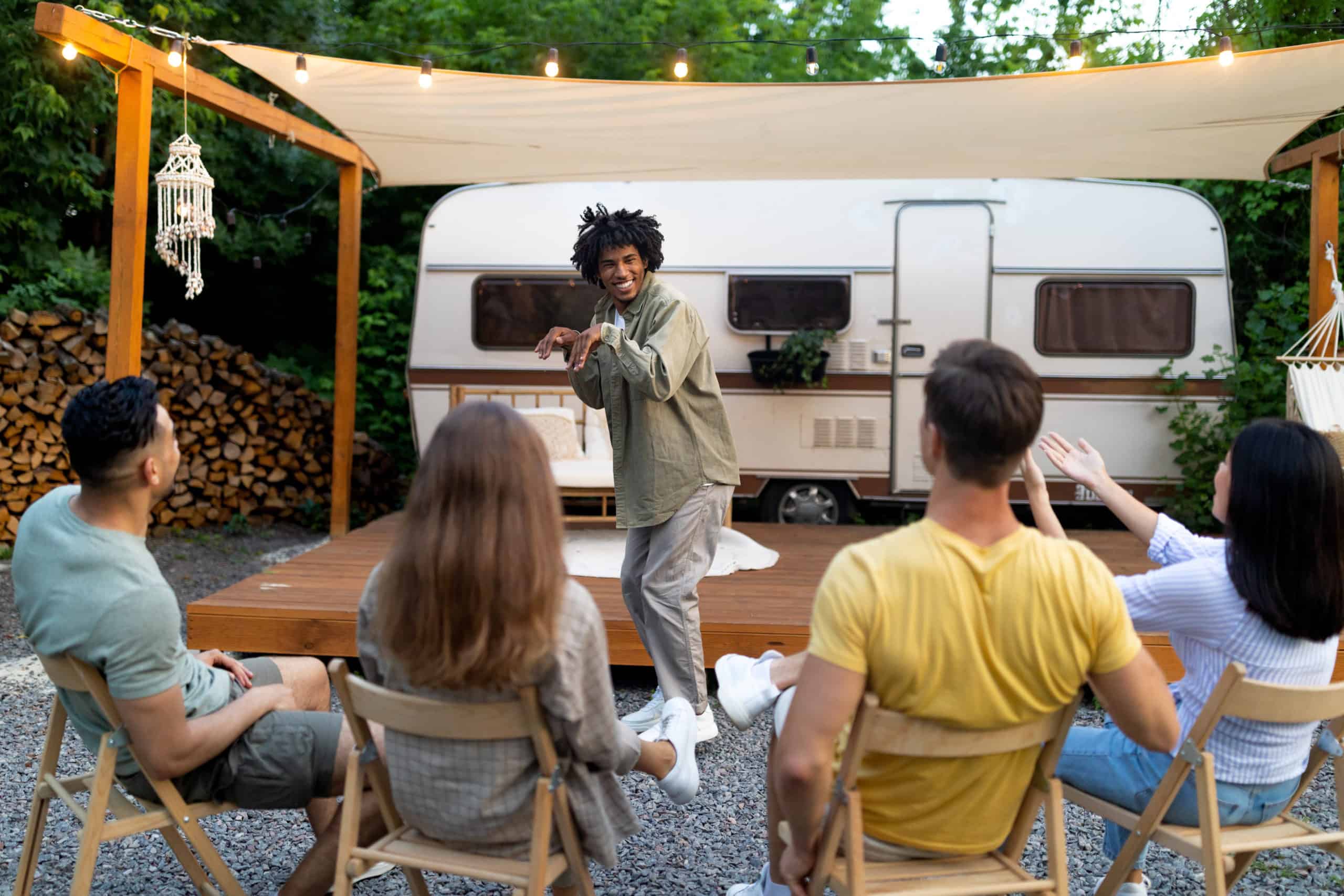 The addition of teams for a game night can truly add a new and exciting dynamic to any game night. Rather than people playing for their own, team game night turns a dull, listless afternoon into a welcome escape filled with laughter, joy, and bonding. It brings you and your loved ones closer and it also yields hours of entertainment for all ages! We put together a list of the best games and board games to play for a team game night.

Admittedly, finding an activity that everyone enjoys can be a challenging task. For this reason, I’ve put together some of the best team game night board games that everyone can enjoy. Let’s get right into it!

See below for our list of the best games to play when hosting a team game night.

King Arthur wishes nothing but honor and prosperity for his people. But as the saying goes, in every seed of good there’s always a piece of bad. Hidden among his brave warriors are those who want to overthrow him, led by the treacherous knight Mordred.

No one knows who Mordred’s minions are except for the great wizard Merlin. There’s only one problem: he can only speak in riddles. If Merlin’s identity is revealed, the land of Camelot will fall into ruins and Mordred wins.

In a fierce battle to control civilization, King Arthur’s loyal servants fight to expose the wrongdoings of Mordred’s minions. Will King Arthur remain on the throne or will Mordred take over? Play the game to find out!

Avalon is a party game filled with deception, deduction, and secret identities. It’s extremely fun and exciting, filled with cool twists and turns!

Merlin is a special character who knows the identities of both teams. Once the cards are dealt, players close their eyes. Merlin will utter something along the lines of “Minions of Mordred, open your eyes.” The good players will keep their eyes shut while the evil players will look around to identify those on their team.

As the game progresses, the players go on missions together. The good team wants the mission to succeed. The evil team doesn’t. In order to win, the evil team will secretly sabotage the good team’s quest.

Following a gruesome murder in Hong Kong, investigators find themselves going through the evidence and clues left by the killer in the murder scene. There’s just one problem; one of the investigators did the killings, actively misleads the team so the secret remains buried.

The forensic scientist holds the key to convicting the criminal but unfortunately is only able to express their knowledge through analysis of the scene. Investigators must therefore collaborate amongst each other and use their keen deductive insight to correctly identify the killer before another murder takes place.

Do you and your team have what it takes to catch the criminal, or will the criminal outsmart you and get away with murder?

The Murderer is assigned at the beginning of the game, as well as the Witness, Accomplice, Investigator, and Forensic Scientist.

The investigators must find the correct Key Evidence and Means of Murder before the end of three rounds. If they fail to give the correct answers, the murderer wins!

Ever since its debut in 1976, Family Feud has become one of the best family game shows of all time. It’s filled with memorable moments, funny catchphrases, and hilarious answers, bringing excitement and joy to viewers across the United States.

The Family Feud board game plays just like the game show hosted by Steve Harvey. For those who aren’t aware, Family Feud puts two family teams of five against each other to match popular survey answers. The team with the most points wins.

The Family Feud board game is inspired by the original Family Feud game show. Objectives are quite similar: two teams battle against one another to match popular survey answers while one player stands as the main show host.

The host asks the participants a question from the provided questionnaire. If the team gives three incorrect answers, the opposing team has a chance to steal the other team’s points.

The Endless Games Family Feud Set comes with all the required items to replicate the game show, including an answer buzzer and a countdown timer.

Monikers is a “dumb party game that respects your intelligence.” At least, that’s what the box says! The game works exceptionally well when paired with close family and friends.

Designed by board game designer Alex Hague, Monikers is a game where two team guess as many names as possible from the given deck. It’s fast-paced, hilarious, and incredibly fun!

Divide your group into two to three teams. Each person deals 10 cards, five of which will be used by both teams for the entire game. Ideally, there must be a total of 40 to 50 cards on the deck.

There are a total of 440 cards in the box, with topics ranging from famous historical people, internet memes, pop culture characters, and more. Depending on the difficulty, each card has its own point value.

Over three rounds, one person on the team gets 60 to 120 seconds to provide clues on the card they’re holding. During this time, the team will try to guess who the character in the card is.

There’s no limit to the number of guesses. If the team can’t guess what the character is, the card holder can skip the card and choose another card. This goes on until the time is up.

A mob of ruthless international gangsters has infiltrated the town. Aghast by the crimes they’ve committed and continue to commit, the town’s civilians agree to lynch them. But there’s a twist—no one knows who they are!

Every day, the civilians hold a meeting in the town hall to discuss who they think the Mafia may be. If they get it right, the Mafia is put on trial. If they don’t, the Mafia will keep killing until they’ve eliminated most of the town. Time is ticking. It’s kill or be killed…

Mafia is a game of deceit, wild accusations, and protestations of innocence. It was created in 1986 by Dimitry Davidoff and to this day is played all over the world.

Before the game starts, the players are secretly assigned the role of Mafia, Civilian, Interrogator, Doctor, Medium, etc. by the Moderator. The objective of this game is to eliminate most of the opposing team. Civilians must do their best to wipe out the Mafia and vice versa.

During every morning meeting, Civilians talk amongst themselves to pinpoint who the Mafia are. If they choose wrong, the person they’ve wrongfully accused will die. That is, unless he or she is saved by the Doctor. However, the Doctor can only save the person he or she chose to rescue the night before.

When night comes, the players will close their eyes and the Mafia will kill one of the Civilians. After the killing, the Moderator wakes the Interrogator at night and asks him or her to select a player to interrogate come morning. The game goes on until all the members of the Mafia or Civilians are eliminated.

Deep within the walls of one of Scotland’s most haunted manors, sly spirits roam around the halls seeking destruction and fear. Upon noticing the restless spirits, fearless ghost hunters take it upon themselves to exorcise them back where they belong.

Realizing the threat the hunters bring, the ghosts do their best to remain concealed until they leave the manor. The hunters aren’t fooled, however, and will do everything to flush out their sneaky targets.

Between the cunning spirits and the fearless hunters, who will come out of this madness intact?

The Phantom Society is a ghost-hunting board game composed of up to 36 rooms with corresponding values. Based upon the tiles destroyed, the ghost hunters must find where the ghosts are hiding before the manor falls into ruin.

The objective of this game is to inflict as much damage to the manor as possible. The board consists of 36 rooms. Each tile represents a value from £1,000 to £6,000. The first team who collects at least £45,000 of damage wins.

The board is filled at the start of each game. Each team has a stack of two colors with values ranging from one to six. Once the board is filled, the ghost hunters close their eyes. The ghosts will then hide 4 different colored ghost tiles in a slot layered beneath each room. The hunters need to destroy the rooms that have ghosts in them by revealing the ghost underneath the tile.

The year is 1944, a time where virtually every part of the world suffered from conflict due to World War II. While no one wants to relive the nightmarish events that occurred during this era, Memoir ’44 gives players the opportunity to protect their respective “countries” without risking their lives!

Memoir ’44 is an exciting historical game filled with 17 unique historical scenarios, 60 command cards, and various troop placements. According to the manufacturers, this board game is designed to commemorate all the sacrifices and efforts men and women made during WWII. This makes Memoir ’44 exhilarating, educational, and inspiring.

Despite the complicated premise, Memoir ’44 is relatively straightforward. While it’s designed for two players, team play is also recommended for a fast-paced 4v4 combat experience.

The objective of the game is to be the first to win a set of Victory Medals. Depending on the selected battle conditions, the medals can be anywhere between four to six.

Heads Up! is a game popularized by TV host Ellen Degeneres. It’s quite similar to Monikers, except instead of only characters, you’ll have to guess from an array of topics. This includes food, animals, celebrities, blockbuster movies, and more.

This game is available to play on iOS and Android, but it’s also available as a board game. The Heads Up! board game comes with 200 cards,48 chips, 6 headbands, a sand timer, and detailed game instructions. It’s a fast-paced game that’s crazy competitive and exhilarating!

Each team receives a set of 10 to 15 cards. The person who’s going to do the guessing will slip on a headband and load it with the selected cards with the words facing out. When the timer starts, the rest of the players will give the guesser hints and clues as to what the word on their forehead is. The first team that gets the most points wins!

What better way to bond with your friends, family, and colleagues than hosting a team game night? Light-hearted games such as Family Feud, Mafia, Heads Up!, and Monikers are best played with large groups. The more the merrier!

If you’re in the mood for something a bit more serious, don’t miss Memoir ’44, Murder in Hong Kong, Avalon, and The Phantom Society. These games require you to use the power of deduction and strategy to win. Good luck and have fun!

If you love playing board games and are looking into joining a board game club or starting your own, then there are a few things you should know about board game clubs. After realizing that I...

If you enjoy playing board games with meeples (little wooden playing pieces) where you have to put them to work in order to gather resources and perform game changing actions, then you will...