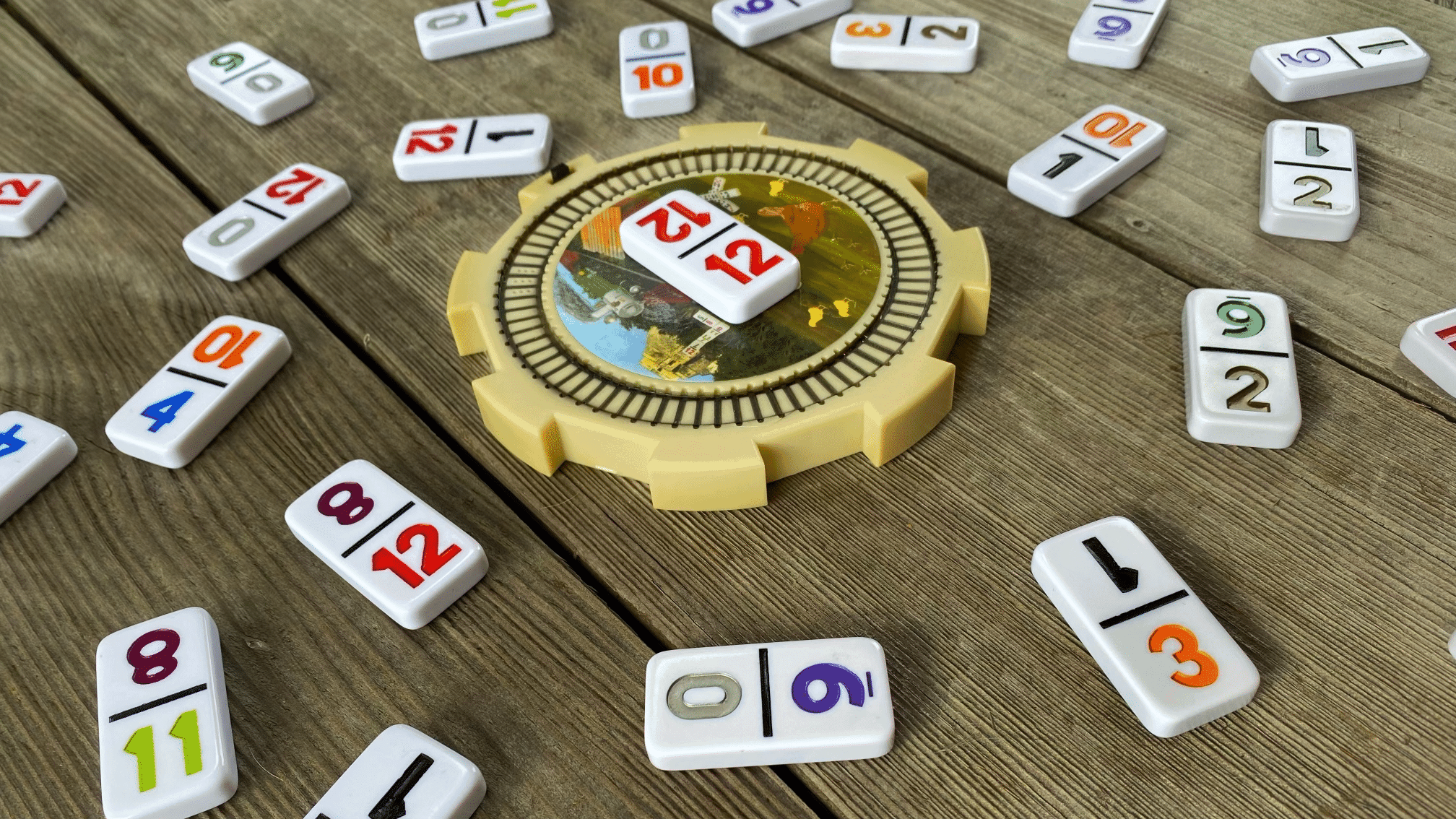 Before we dive in to our Mexican Train Dominoes review and strategy guide, here is a bit of a back story. My sister and I did the inevitable… we grew from children into adults; we were too busy with jobs, school, and hanging out with our friends.

We lost sight of staying home and hanging out as a family. However, as we got older and settled down into a routine, we realized how much we missed our family game nights.

We learned how to play Dominoes through our best friend’s grandmother. After going over her house a few times to play, we were hooked.

We looked at each other one day and decided that we needed to introduce our parents to Mexican Train Dominoes. Therefore, we bought a set of 12-sided Dominoes for Mexican Train of our own so that we could bring it over to the next family game night.

Ever since that day, we have been playing almost every weekend! It was the only game our parents wanted to play (until recently where they were up to trying some new games), and we never complained once. Why? Because we finally had our family time back!

What is Mexican Train Dominoes?

Mexican Train Dominoes is a game played with double sided numbered dominoes, where the objective of each round is to play all of the dominoes/tiles from your hand before other players do.

Players place their tiles on various chains or “trains” that emanate from a central hub or “train station.” Each player has their own train, however, there is a universal train that belongs to all players, called the “Mexican” train.

The rules for “The Train Game” were developed by a couple, Roy and Katie Parsons, in California in the early 90’s. After becoming more widely known, the Puremco Company purchased the rights for the game and turned it into the game we know and love today, Mexican Train Dominoes.

The premise of the game is believed to have been inspired by several Chinese Domino games including Tien Gow, also known as Heaven-Nine, Pai Gaw and Kap Tai.

Mexican Train also includes some “just for fun” features such as:

How To Play Mexican Train Dominoes

In this Mexican Train Dominoes Review, we will go over how to set up your game, as well as, how to play! Stay tuned until the end and we will reveal some of our favorite strategies.

Check out our Mexican Train rules and gameplay below…

How Long Does Mexican Train Dominoes Take To Play?

Through our experience playing the double 12 Mexican train dominoes, we have had games last usually between 2-3 hours. It really depends on the version you are playing, how many people, and how long it takes each player to think/play their hand.

With 5 players, a game of double 12 Mexican Dominoes takes about 3 hours to play.

When you play a game as much as we have played Dominoes, you start to pick up on certain ways that people play the game. Here are the three strategies we use most often to help us win!

If there are any dominoes that don’t fit in my planned train, I place them at the bottom of my tray. When the round begins, I will be placing dominoes on my train from the planned train on my rack. If I have a lot of extra tiles that aren’t a part of my train, I will try and open up the “Mexican” train as soon as possible. If at any time I have an extra domino that can be placed on another train, I do so. The logic behind this is that I know I can place on my train at any time with the dominoes that I planned out, so I want to try and get rid of the extra dominoes as soon as possible!

The only time I WILL NOT place an extra domino on another train is if it is a double that I do not have a domino to close!!! This is just too risky for me, if I place a double down without a domino to back it up, I am forced to pickup a domino from the spare pile. If I am lucky, it will match the number that I need but if it doesn’t, now I must open up my train for the other players, essentially ruining my planned train!

This is Branden’s Strategy. Although he uses some organization by planning out his train ahead of time, Branden relies on taking risks and causing chaos to win.

He will constantly play doubles without having a domino to back it up. He would rather risk opening up his train and get rid of a double as soon as possible (and hopefully mess someone else’s up in the process) than hold on to those pesky doubles! His way of playing doesn’t always work out in his favor, but we have found that his risk taking does pay off from time to time.

In this strategy, you begin by laying out your train tiles on the rack and arrange them in a way where other players will not be able to tell how many tiles you have on your starting train. Try to use fake breaks so they do not think you have a continuous train. This can really throw them off!

This strategy really focuses on how you lay your tiles out in the beginning. You will find that there may be multiple options to use when laying out your tiles. If there are multiple options, then always try to use the higher number tiles first. Remember, at the end of the game, lowest scores wins. Therefore, during the game, always keep an eye on your higher tiles. If you can get rid of a higher tile at any time, do it.

Build a train with fewer tiles, but more points. Do not focus on the amount of tiles when building out your train. Rather, focus on the higher points and put them towards the beginning of your train if you can. Getting rid of higher point tiles is important because the round can end before you are able to get rid of all of your tiles. If you are left with low score tiles at the end of the round, then you should be in good shape to win!

If you follow us on instagram, you will see that we play Mexican Train Dominoes quite frequently! It is a family favorite game of members of all ages in our household. With simple rules and strategies, it’s an easy game to learn and play.

We love playing dominoes on our patio during the summer months, it’s a very relaxing game to play outdoors after a long week of work.