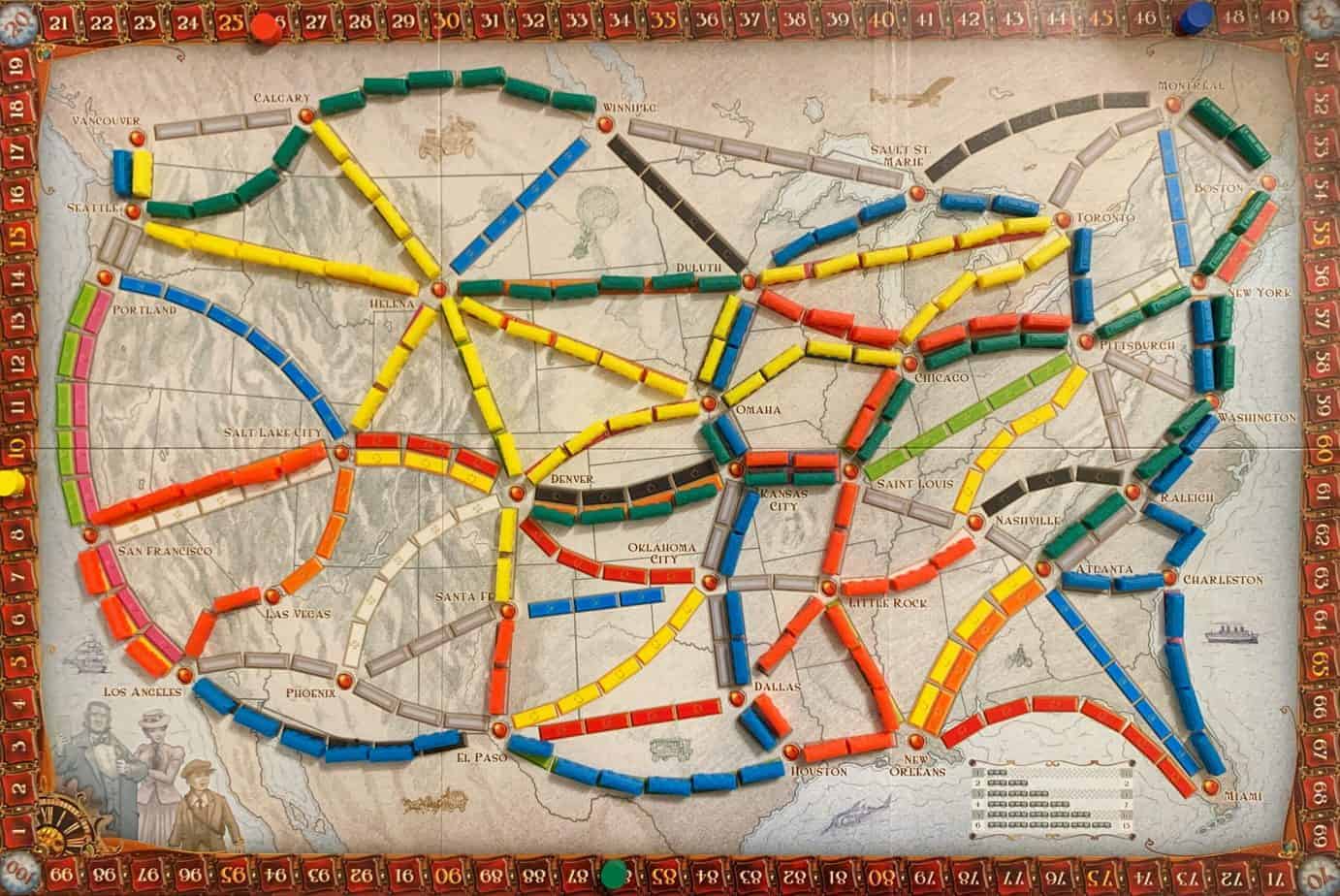 Ticket to Ride is a classic board game that was first published in 2004. It has been a favorite among families and friends for years. In this guide, we’ll take you through the basics of how to play Ticket to Ride, as well as some advanced strategies to help you master the rails and come out on top.

Whether you’re a first-time player or a seasoned pro, this guide will give you the knowledge you need to dominate the competition. So grab your friends, roll the dice, and let’s get started on mastering the rails!

Overview of Ticket to Ride

Ticket to Ride is a railway-themed game where players collect train cards, claim railway routes, and try to connect cities listed on their Destination Tickets. The player who scores the most points by connecting cities and completing destination tickets wins the game. The game board depicts a map of various cities across North America and players will use miniature train pieces to claim routes on the map.

The purpose of this guide is to take you through the basics of how to play Ticket to Ride, as well as some advanced strategies to help you master the rails and come out on top.

Setting Up Ticket to Ride

The first step in playing Ticket to Ride is setting up the game board. The game board depicts a map of various cities across North America and players will use miniature train pieces to claim routes on the map. The board is made up of different colored spaces that represent different railway routes.

To set up the game, begin by unpacking all the components from the box. This includes the game board, train cards, destination tickets, train markers, and a scorepad. Once all the components have been unpacked, lay the game board out on a flat surface. Make sure that all players have a clear view of the board and that everyone can reach the train cards and destination tickets.

Each player will start with a set of colored train markers and a same colored playing pawn that will be used to keep score. The train markers are used to claim railway routes on the game board, while the train cards are used to purchase these routes. The destination tickets are special cards that list two cities that a player must connect by the end of the game. Players will draw destination tickets at the beginning of the game and will keep them hidden from their opponents until the end of the game.

Shuffle the deck of train cards and place them in a draw pile next to the board. The top five cards are then drawn and placed face up next to the draw pile. This forms the “face-up” cards that players can purchase during the game. Shuffle the destination tickets and deal three to each player. Players then keep two of the three and return the third to the deck without showing it to their opponents.

With the game set up and ready to go, players can now start their journey to connect cities and score points.

Note: This is the game set up for the original Ticket to Ride. Set up may vary slightly based on the edition and the version of the Ticket to Ride game you are playing.

Basic Gameplay of Ticket to Ride

Once the game is set up, players can begin their journey to connect cities and score points. The objective of the game is to score the most points by connecting cities and completing destination tickets. The game is played over a series of turns, with each player taking a turn in clockwise order.

Note: If there are two routes next to each other, a player can only claim one of those routes during the game. They cannot claim both parallel routes.

The gameplay of Ticket to Ride is simple, but the game offers a lot of depth and replayability. The strategy lies in how to balance completing destination tickets with claiming routes, and how to use the train cards effectively. The game also offers many different ways to score points, so players must be adaptable and think ahead to come out on top.

Advanced Strategies for Ticket to Ride

As you become more familiar with the game, you may want to start incorporating more advanced strategies to give yourself an edge over your opponents. These strategies can help you make more efficient use of your train cards, block your opponents from claiming routes, and plan ahead for the endgame.

Another important strategy is planning ahead. You’ll want to think about which routes you want to claim and which destination tickets you want to complete. You should also consider how many train cards you need to complete these routes and destination tickets and how many turns it will take to acquire them. By planning ahead, you can make the most of your turns and score more points.

It’s important to consider the balance between both options, as completing too many destination tickets can leave you with not enough train cards to claim routes, and focusing too much on claiming routes can leave you without enough points to win.

As the game nears its end, players should start focusing on completing their destination tickets and claiming their longest continuous route. It’s important to keep an eye on how close the game is to the end, and adjust your strategy accordingly. Try to keep an eye on how many trains a player has left, as once they are down to two trains, this triggers the last round of the game.

By mastering these advanced strategies, you’ll be able to outplay your opponents and come out on top in Ticket to Ride.

Note: As in any game, there’s no one specific strategy that always wins, but understanding these strategies and incorporating them in your gameplay can give you an edge over your opponents.

Tips and Tricks for Playing Ticket to Ride

As you become more experienced with Ticket to Ride, you’ll discover many different tips and tricks that can help you improve your gameplay. These tips can help you make better use of your train cards, avoid common mistakes, and make the game more fun for everyone.

One of the most common mistakes players make is drawing too many destination tickets. This can be risky because if you can’t complete the tickets in time, you’ll lose points. Another mistake is to not claim routes early enough. If you wait too long to claim routes, you’ll miss out on opportunities to score points and block your opponents.

There are many variations and expansions of Ticket to Ride that can add new elements to the game and make it more exciting. For example, the Europe and Asia maps add new cities and routes to the game, making it more challenging. The 1910 expansion also adds new destination tickets, train cards, and special actions that can change the way the game is played.

By following these tips and tricks, you’ll be able to improve your gameplay and make Ticket to Ride more fun for everyone.

In conclusion, Ticket to Ride is a classic board game that offers a lot of depth and replayability. The game is easy to learn, but mastering the rails takes time and practice.

By following the strategies, as well as the tips and tricks provided in this guide, you’ll be able to improve your gameplay and make Ticket to Ride more fun for everyone. Remember to keep experimenting with different strategies and have fun while playing.