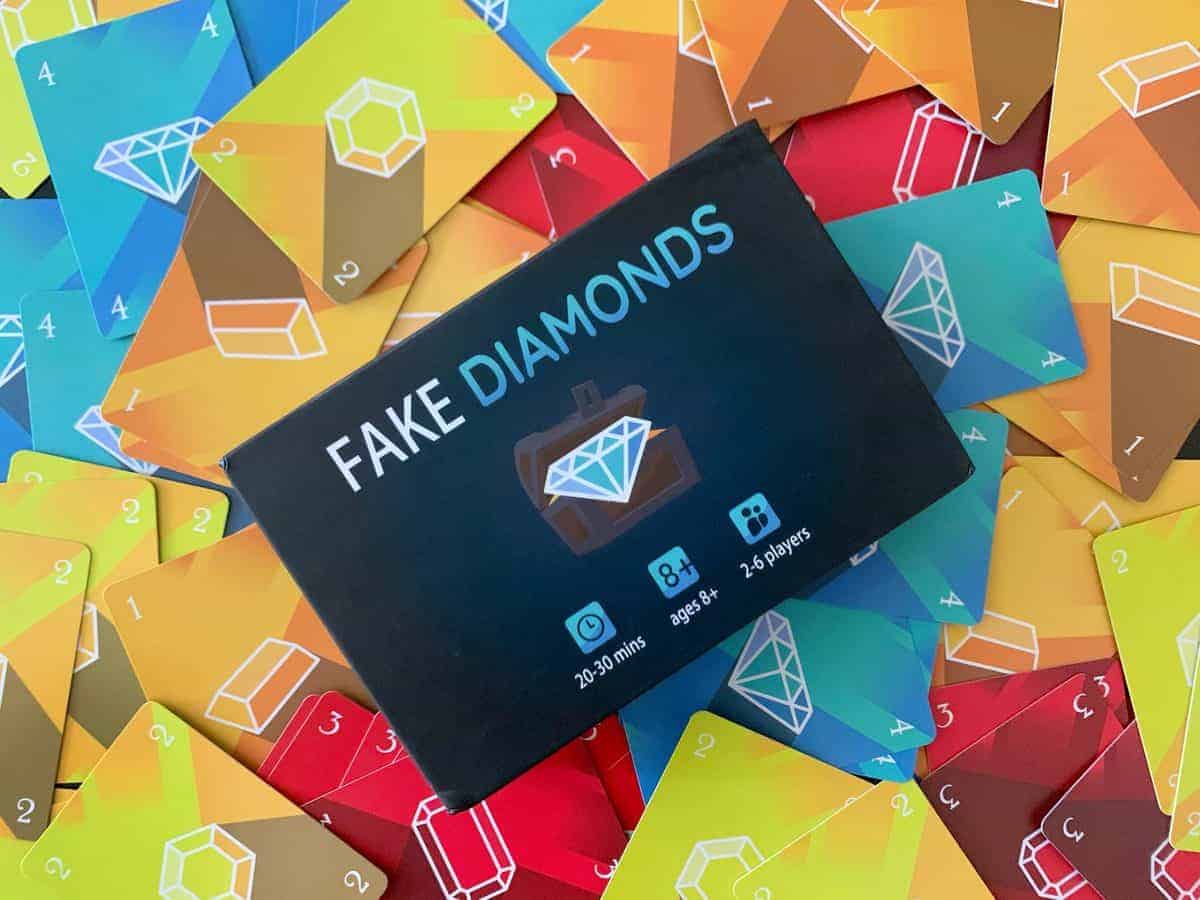 Fake diamonds is an easy to learn and fun to play bluffing card game! When you play, you will find yourself utilizing similar functions to the popular mining game, “Minecraft,” while also stirring in some bluffing, similar to the hilarious card game “Bullsh*t.” Add in a little bit of goofiness that we know from the famous card game, “Exploding Kittens,” and BAM… this recipe forms a family friendly, creative version of an awesome bluffing card game called Faked Diamonds! The Game Night Gods were lucky enough to play this bluffing card game before it was released to the public for preorder. Here is our review of the Fake Diamonds card game!

In this Fake Diamonds review, I will go over the main components of the game, how to play Fake Diamonds, our initial thoughts before playing, and what we thought after our play through. Let’s get into it!

THE COMPONENTS OF THE GAME

The amount of cards may be a bit overwhelming at first, but setup is very simple. Here are the 3 steps to setting up the Fake Diamonds card game:

After you get familiar with the components of the game and everything is setup on the table, you are ready to play!

HOW TO PLAY FAKE DIAMONDS

The object of the game is to be the player with the most points at the end of three rounds by collecting as many treasure cards as possible (preferably high valued treasure cards). At the start of the game, each player starts with a handful of “action” cards. On a player’s turn, they will “mine” for resources by picking up a mining card from the designated deck of cards.

That card will tell them which resource they will need to mine, and therefore which point amount they should pick up… but here’s the catch! If a player wishes, they may bluff and pick up a resource that contains a higher point value!

The treasure cards are valued as follows:

After picking up a mining card, you can either draw the same treasure that was on your mining card or bluff to gain more points. Be careful! If someone calls your bluff, then the person who calls your bluff gets to keep your treasure.

For example, if you draw a gold “mining” card, but decide to try your luck and pick up a “ruby” card, you better hope another player doesn’t call you out on it! Get out your poker face, you’ll need it.

If someone calls a bluff but they are wrong, then they must give up that same treasure from their own stack to the person they called out. If they don’t have a same value treasure, then they have to give up one of their other treasures of the next highest point value.

Throughout gameplay, there are special cards called “action cards” that can be played to either steal resources from another player, collect extra resources while mining, prevent negative actions from being played against you, and so on.

The round ends when there are no more mining cards left to pick up. Play ends with the person who picked up the last card.

After each round, mining and action cards get reshuffled and placed/distributed onto the table again or to a player’s hand. Each player’s collected resources stay in a pile in front of them and are carried over to the next round.

Play continues for another two rounds. At the end of the third round, players count up all of the scores of their mined resource cards and the player with the most points wins the game!

OUR INITIAL THOUGHTS BEFORE PLAYING

Our first impression of the game was that it had great packaging and cover design. The name was catchy and pulled us in, wanting to know more of what was to come. After opening the game, we were not disappointed that the nice cover art carried over to the playing cards. The simple design was pleasing to the eye without being too busy where it would take away from the gameplay.

While setting up the game, we were surprised to see how many card piles we were placing. After dealing out the action cards to each player, we took a moment to read each card and organize our hands.

With a nice variety of action cards in our control, we weren’t sure how each of the actions would come into play, but we were curious and eager to find out.

PLAYING OUR FIRST ROUND

We played our first play through with 3 players, myself (Kait), as well as Hillary and Momma D. While Hillary read the directions, we set up the different card piles and distributed the action cards.

We all agreed that the first few rotations of the first round we didn’t have the hang of it just yet, but we were all surprised about how fast and easily we picked up the game after playing a few rounds.

The element of picking up the mining cards and selecting the resources on its own is enjoyable enough with the ability to bluff, but add in the mysterious action cards and we were quickly having a ball!

Not knowing for sure if someone is bluffing is frustrating (but exciting) enough, then you add in an action card that totally ruins your plan and it’s insanity!

For such a simple card game, we were highly amused and each round proved to be more entertaining than the last.

WHAT WE THOUGHT OF FAKE DIAMONDS

We were lucky enough to receive a play test copy of the game that we passed along to another group of players after we were done playing. The most honest and impactful thing we can say about this game is that we were disappointed we didn’t get to keep it!

We had so much fun playing and we wanted to be able to keep playing, so we right away went and preordered a copy of the game for ourselves!

While playing, we kept mentioning friends and family members we felt would really enjoy playing the bluffing card game Fake Diamonds. All three of us agreed that the game is simple enough that younger players would understand the gameplay, but also that the different components and action cards were mysterious and tricky enough to provide fun and laughs for older players.

If you enjoyed our review and would like to know more about Fake Diamonds, click here to visit their website and learn about preordering your own copy today!

If you have any questions or suggestions, feel free to leave a comment below!