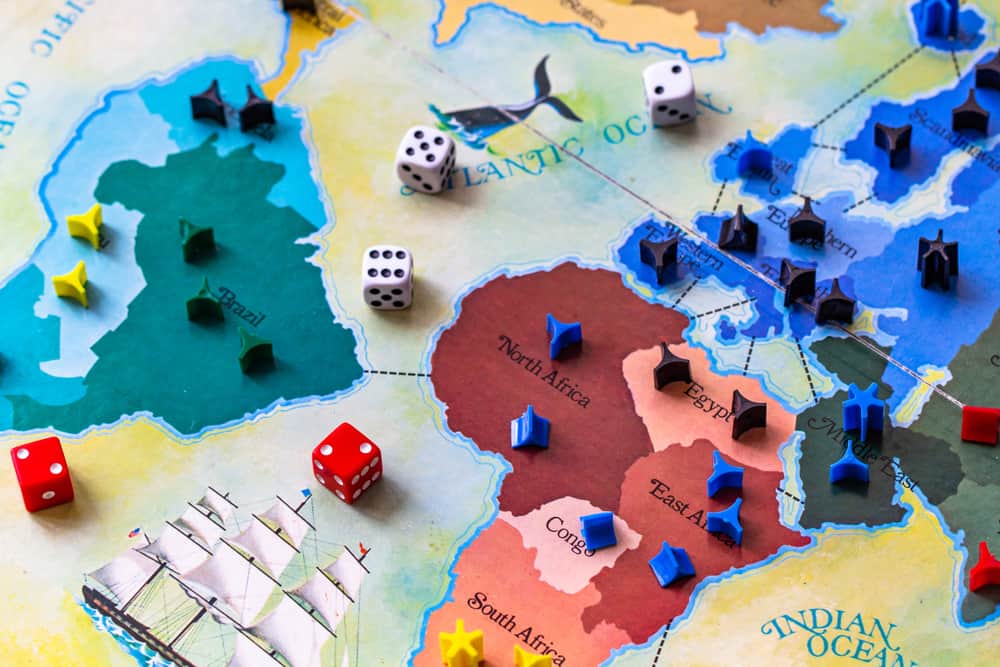 We have found that some of our favorite board games to bring to game night are centered around the idea of “war.” Therefore, we have compiled a list of the best war board games.

If Sun Tzu had been a gamer who relied on dice to defeat his foes rather than the sword, The Art of War would have been a very different book.

How do you fight a war and bring your “foes” to heel without actually engaging in conflict? You do it in the company of friends, family, and other gamers, by playing board games that teach you the value of strategic thinking, forward planning, cooperation and communication, and the sweet taste of victory.

Wargaming isn’t a new hobby, and both the grandfather of science fiction, HG Wells, and the crown prince of horror cinema, Peter Cushing were avid devotees of the pastime. And it was Wells who wrote the first definitive rules, Little Wars, for the hobby that led to him being known as “the father of miniature wargaming”.

But wargaming has come a long way since Wells and Cushing’s heyday, and as well as being the cornerstone that was directly responsible for the creation of Dungeons & Dragons, it has been popularised and dragged into the future by one of the most widely popular games in history, Warhammer 40,000.

But what if you’re a wargamer who doesn’t have the time and money to invest in armies of miniatures? Or a newbie who wants to discover more about the hobby without having to fully immerse herself in it? And what if you just want to play a game that you can lose yourself in with your buddies on a pizza-fueled Saturday evening?  How can you enjoy playing war, when your free time is limited and your finances don’t stretch as far as they used to?

You do it the way that games have been played for decades, you gather around a board, set your pieces up, quickly learn the rules, and set about destroying your opponents in a carefully orchestrated campaign that Sun Tzu would be proud of.

The Best War Board Games

Finding the right war-based board game to do that with, that’s where it gets a little complicated. With so many games out there, and so little time to play them, trying to find a board game that you can just jump straight into and play isn’t exactly straightforward or easy.

That’s why we decided to put our three-decade gaming history to good use and find five of the best board games that both would-be and veteran wargamers can spend endless hours playing, and enjoying, with their nearest and dearest.  We’ve made the art of conflict simple, so all you have to do is gather around your chosen board, cry havoc and let slip the dice of war…

Every wargamer starts somewhere, and Risk is the board game that pulled most of them into the hobby that would eventually become their all-consuming passion. Fast, furious, and relentless, this turn-based board game uses a combination of strategy and luck to pit the armies of the world against each in global conflict.

The game includes five armies, all the dice and cards that you need to play, and a board that features a map of the world. Each player is assigned a number of countries, and throughout the duration of play must defend their own territory and take over the nations that the other players inhabit.

Risk is, and always will be the gateway drug to a much wider, and in most cases far more complicated world that you’ll readily sign up to enjoy after playing the game that has enthralled, and captured the imagination of generations of gamers.

We’ll freely admit that this is where it all started for us when we were young, as Risk was a family favorite game that we used to play every Sunday evening.

Be warned though, once you’ve been bitten by the Risk bug, there’s a good chance that you, your family, and your friends will become lifelong fans of the intense, armed combat and devious strategy that lies at the heart of it.

Axis and Allies 1941 plunges its players straight into the middle of one of the most grueling conflicts in human history, the Second World War.

Set during the pivotal point of the war, 1941 allows its players to assume control of one of the Allied or Axis powers and through a combination of planning, strategy, and military action, dictate the outcome of the war that sent the whole world spiraling into chaos.

A two to five-player game that lasts around two hours, Axis and Allies is one of those incredibly rare and often hard to find board games that’s easy to play but takes a lifetime to master.

Utterly compulsive and incredibly addictive, it’ll transform even the most reluctant of gamers into the sort of obsessive players who are absolutely determined to change the course of recorded events and alter the face of recorded history.

And the opportunity to change history, to alter established results by replaying decisive moments and battles is part of what makes this game unique.

It doesn’t follow a set pattern of events, and anything and everything can be changed by the roll of dice and a brave and bold strategy. History is written by the triumphant, and thanks to Avalon Hill, that history is still unwritten.

1941 is the slippery slope to economic ruin, and if you get too involved in the game, your bank balance will feel it as you invest in anything and everything that wears the Axis and Allies banner in a desperate attempt to sample everything the franchise has to offer.

From the stars, we came and to the stars, we return is a concept that Twilight Imperium, a board game set in the far future, where players have only one goal, to conquer the galaxy, and become Emperor of the cosmos, embraces.

It’s a game that pushes the possibilities of war and the ways in which it might be fought in the future to their absolute limit and is only governed by the player’s imagination. And its incredibly substantial rule book.

Each player takes control of one of seventeen different civilizations, each of which has its own unique technologies and path to follow in order to secure victory, and become the ultimate rulers of known space.

Through a combination of military action, trade, and exploration, each player has to navigate the turbulent galactic waters of diplomacy and war, to ensure that their species flourishes, while the other players fall by the wayside.

Fantasy Flight Games, the company that created and published Twilight Imperium has built their hugely successful brand by dedicating themselves to designing completely immersive, detailed games that inspire and fire their player’s imaginations, and this space opera-driven wargame follows that ideal to the letter.

It might have a similar name, but Twilight Struggle is a completely different animal to Fantasy Flight’s game of universal domination.  Rather than placing the emphasis on battlefield decisions and open warfare, Twilight Struggle recreates the near fifty-year conflict that shaped the world in the aftermath of World War Two, the Cold War.

A two-player game that pits the United States against the USSR, players spend the ten rounds that the game is played over attempting to swing global opinion and influence in their favor.

It’s a strategic, insightful game that encourages its players to think outside of the box and adjust their trigger-happy mindset to suit the ever-changing face of world politics and economic and social change and upheaval.

Wars aren’t always fought by soldiers, sometimes they’re fought behind closed doors and by politicians and agencies engaged in the art of espionage, and Twilight Struggle uses that idea to create a unique and completely immersive playing experience.

And our last pick of the best of the best war-based board games catapults its players straight back to the beaches of Normandy and the battlefields of Europe in the dying months of the Second World War. We know, we’ve already included one game set during that conflict on our list, but trust us, you’ll be glad that we chose Memoir ‘44.

One of the easiest war games to learn how to play and get to grips with, Memoir ‘44 uses the Command and Colors system that relies on cards and battle dice to recreate seventeen different historical scenarios from World War II that players can immerse themselves in.

But just because those battles ended a certain way in the real world, it doesn’t mean that they’ll follow suit in the gaming world, and how each game comes to a close, is entirely up to the decisions that the players make, the hand that they’re dealt and the way that the dice roll.

It’s fast and easy to play and most games don’t last more than an hour but as it’s so simple to play and straightforward to master, once you do start playing Memoir ‘44, we’re sure that you won’t want to stop until you’ve played every scenario multiple times.

Which War Board Game Is The Best One For Me?

While all of the board games on our list will quite literally change the way that you think about gaming, if we were forced to choose just one game to recommend to novice, and long-time gamers alike, we’d have to pick Memoir ‘44.

It’s fast, furious, and hurls its players straight into the heart of the action, and as we’ve already said, it’s quite possibly the easiest,  and the best war-based board game we’ve ever played.

What Is A Wargame?

A wargame is a game that is played either on a board or on the purpose-designed surface using miniatures that pits players against each other in rule-based scenarios that use military action or conflict to guide gameplay.

They can be incredibly short, fast, and involving or take hours (and where miniatures are used, even days and weeks) of intricate strategic thought to resolve, but they are always fun, and incredibly engaging, which explains why wargaming is one of the fastest-growing and most popular hobbies in the world.