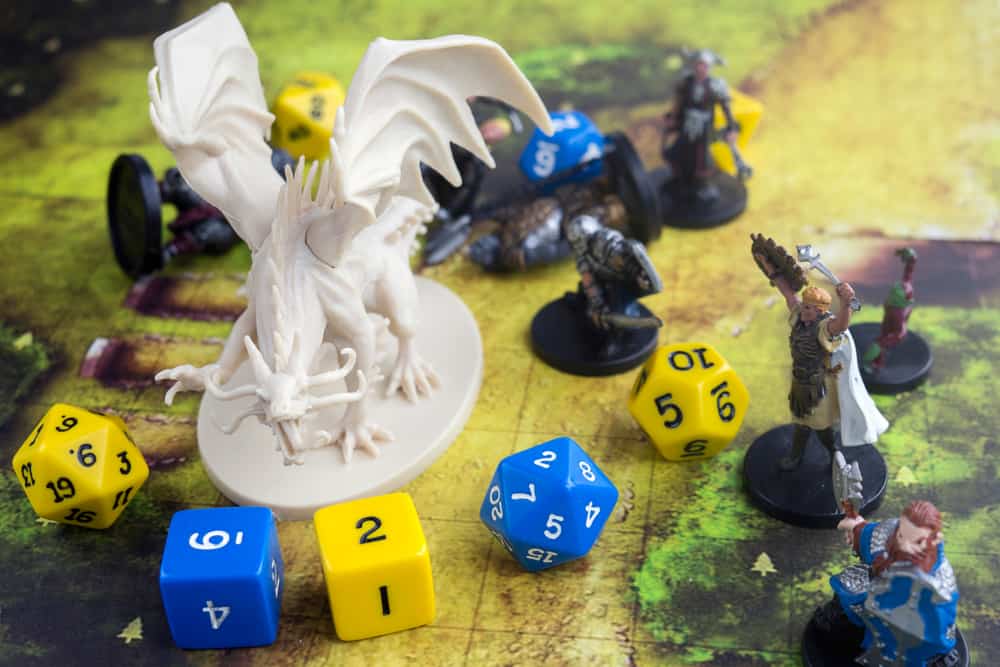 The essence of a role-playing game is that it is a group, cooperative experience – Gary Gygax

In 1974, two wargaming fanatics from Lake Geneva, Wisconsin, Dave Arneson and Gary Gygax changed games and gaming forever. From this, they sparked some of the best RPG board games created in following years.

Dungeons & Dragons, the game that the duo created in the basement of the Gygax’s home, demanded that its players assume the roles of characters in a fantastical world filled with monsters, magic, and treasure that the duo had dreamed up during a series of long, caffeine-filled weekends.

With the aid of a Dungeon Master (a player who is part referee, part guide, and part storyteller), in this new and exciting games, the players and their characters could embark on a series of wild and incredible adventures using only their courage, imagination, and more than a few well-timed dice rolls, to fight evil and get rich or die trying.

It was the first role-playing game and an overnight sensation that has captured the hearts and minds of multiple generations of fans and avid gamers since it made its rather inauspicious debut in the first half of the decade that time forgot.

It may have been the first role-playing game, but Dungeons & Dragons certainly wasn’t the last, and an entire industry grew up around it, one that invented a multitude of games based on every possible fantastical scenario that could be dragged from the depths of the human imagination.

Horror, science fiction, superheroes, the old West, espionage, all became source material for role-playing games, and as the role-playing universe expanded, it drew an ever-increasing number of adherents to its bosom. It was and is a cultural phenomenon that continues to go from strength to strength.

In the five decades since Arneson and Gygax rolled their first saving throws, Dungeons & Dragons has evolved far beyond its original First Edition rules, and so have role-playing games.

The gaming system that once eschewed the use of a board, has now readily accepted it as part of its cultural canon, which has seen the birth of a relatively new phenomenon, the role-playing board game.

Designed to cater to the players who don’t have the time to devote to a campaign, but still yearn to embark on fantastical quests, RPG board games are the stop-gap solution for the working stiff who longs for the days of high adventure but thanks to the demands of having to do the whole adulting thing, can no longer spare the hours to set sail on those endless seas.

And we’re guessing that’s why you’re here. You’re probably one of those frustrated gamers that dreams about having the time to play again, or maybe you’re new to the RPG world and want to experience it in the comfort of a more traditional, board-based environment, but don’t know where to begin, or which RPG board game to play.

Don’t worry, we’ve got it covered and we’ve used our four-decade gaming history to find the best RPG board games that veterans and newbies alike can lose themselves, and their characters in. It’s time to roll for initiative because your adventure is about to begin…

It would be remiss of us not to include the very first (and still one of the best) RPG board games that D&D’s chief architect, Gary Gygax, had a hand in designing and creating, Dungeon!

Originally made to be an easy to play, quick version of the game that inspired it,  it’s a fast-moving, blink and you’ll miss it game that plunges its players into a dark dungeon filled with monsters, traps, and treasure.

In Dungeon!, players assume the role of a fighter, rogue, cleric, or wizard, and their objective is simple: explore the rooms of the dungeon and kill enough monsters and earn enough treasure to win. It isn’t bogged down by any unnecessary and overly complicated game mechanics and relies on two six-sided dice and a set of monster and treasure cards to guide play.

Combat is determined by dice rolls, and the treasure that players acquire is decided by the luck of the draw. It compresses the Dungeons and Dragons experience, and the excitement of role-playing into a rabid and feverish game that can last anywhere between thirty minutes and an hour. Which means that you’ll always have enough spare time for a quick trip into the dark, and terrifying depths of the Dungeon!

Despite the fact that its name riffs on the game that obviously inspired it, Mice and Mystics has far more in common with a charming fairy tale than the rugged fantasy settings of its precursors and rivals.  A story-driven game for four players, Mice And Mystics sends its players on a dramatic quest to free the Prince that they’ve sworn fealty to, who has been imprisoned in the dungeons of his own castle.

Transformed into mice by the witch who led a coup against the ruling house, the players assume the roles of servants and guards who have to make their way through the castle that used to be their home but has now become the stuff of nightmares, in order to return the rightful ruler to his throne.

Filled with danger, mischief, “monsters” and magic at every turn, it’s an involving and enthralling game for all ages that hurtles along, and will only soak up an hour or two of your time to set up and play. The main problem with Mice And Mystics is that one game is never enough, and once you start playing, you’ll never want to stop.

History holds a special place in the heart of gamers, and one of the oldest fantasy RPG board games still in production (thanks in no small part to its devoted and incredibly loyal fanbase) is Talisman. First published in 1983 by Games Workshop, Talisman is currently on its fourth revised edition and is now part of the Fantasy Flight Games family.

The core edition of the game lets its players choose to become one of fourteen different characters before setting forth on an adventure to locate and find the Crown of Command, the most powerful object in all of creation.

In order to successfully negotiate the perilous journey to find the Crown, players and their characters need to build their strength, intelligence, and life points by battling monsters, finding magical weapons and charms, and securing a Talisman, the fabulous bejeweled key that will grant them access to the Crown.

The board is fraught with danger and every dice roll could mean the difference between a character succeeding or dying and having to go back to the beginning and start again.

The game encourages players and their characters to cooperate, or ultimately turn on each other as events dictate, in order to acquire the Crown, which makes Talisman a highly competitive, and thoroughly absorbing way to spend an afternoon or an evening.

Not every RPG board game is set in far-off fantastical realms and Arkham Horror uses the same premise as Chaosium’s Call Of Cthulhu, the ongoing fight against the Elder Gods and many-tentacled horrors of H.P. Lovecraft’s enduring mythos fiction.  It’s up to the players to stop the Ancient One’s, aided by their cultists and followers, breaking through into our dimension and transforming the world into a living hell.

Players assume the role of investigators in the New England town of Arkham during the late nineteen twenties, and they must trust each other and work together to solve the mysterious clues and battle the monsters and their human followers who would seek to make the Earth their own.

We know, it sounds incredible, doesn’t it? And no matter how much fun you think it sounds just by reading our brief description, it’s much more fun to play, as you’re gradually drawn into a reality that you ever dared to dream could exist, one subsumed by madness and things from beyond the veil.

Dragons, and zombies and vampires… Oh my! We’ve saved the best for last and returned to the game that started everything, Dungeons & Dragons for our final choice. Castle Ravenloft is set in the horror-inspired campaign world of Ravenloft and combines all of the playability and action of D&D with a spine-tingling dose of horror on an ever-changing board.

The scenario book provides the characters with a multitude of different adventures that can be played out on the thirteen piece board, all of which pit the characters against the forty included miniatures that represent the undead horrors of Castle Ravenloft, before finally having to confront the chief architect of terror, the vampire Count Strahd von Zarovich.

Relying on a D20 (that’s a twenty-sided dice) to determine combat, Castle Ravenloft compresses Dungeons & Dragons into an infinitely digestible form and makes it possible to enjoy it in bite-sized, hour-long chunks.  Honestly, we don’t remember the last time that we had this much fun playing a board game. It really is that good…

Which RPG Board Game Is The Right One For Me?

While all of the games on our list are fun, engaging, and exciting to play, there is one that stands heads and shoulders above the others, thanks to its ease and simplicity of play. That is, of course, Castle Ravenloft, which is as we’ve said, one of the most enjoyable games that we’ve ever played. It’s the most fun that you’ll ever have with a vampire, a dragon, a D20, and an interchangeable board.

What Is A Role-Playing Game?

A role-playing game is one in which the players assume the identity of characters in a fictional setting to achieve the specific purpose of the game that they’re playing.

Whether that’s solving a mystery, fighting an ancient evil, or attempting to become the victor after completing a set of challenges, the character whose role they assume, becomes the player’s avatar within that game.

Continue Reading
link to How To Sell A Board Game

Board games may seem like a thing of the past due to the rise of technology such as smartphones and TVs, but it may surprise you that board games are actually getting more and more popular. Some say...