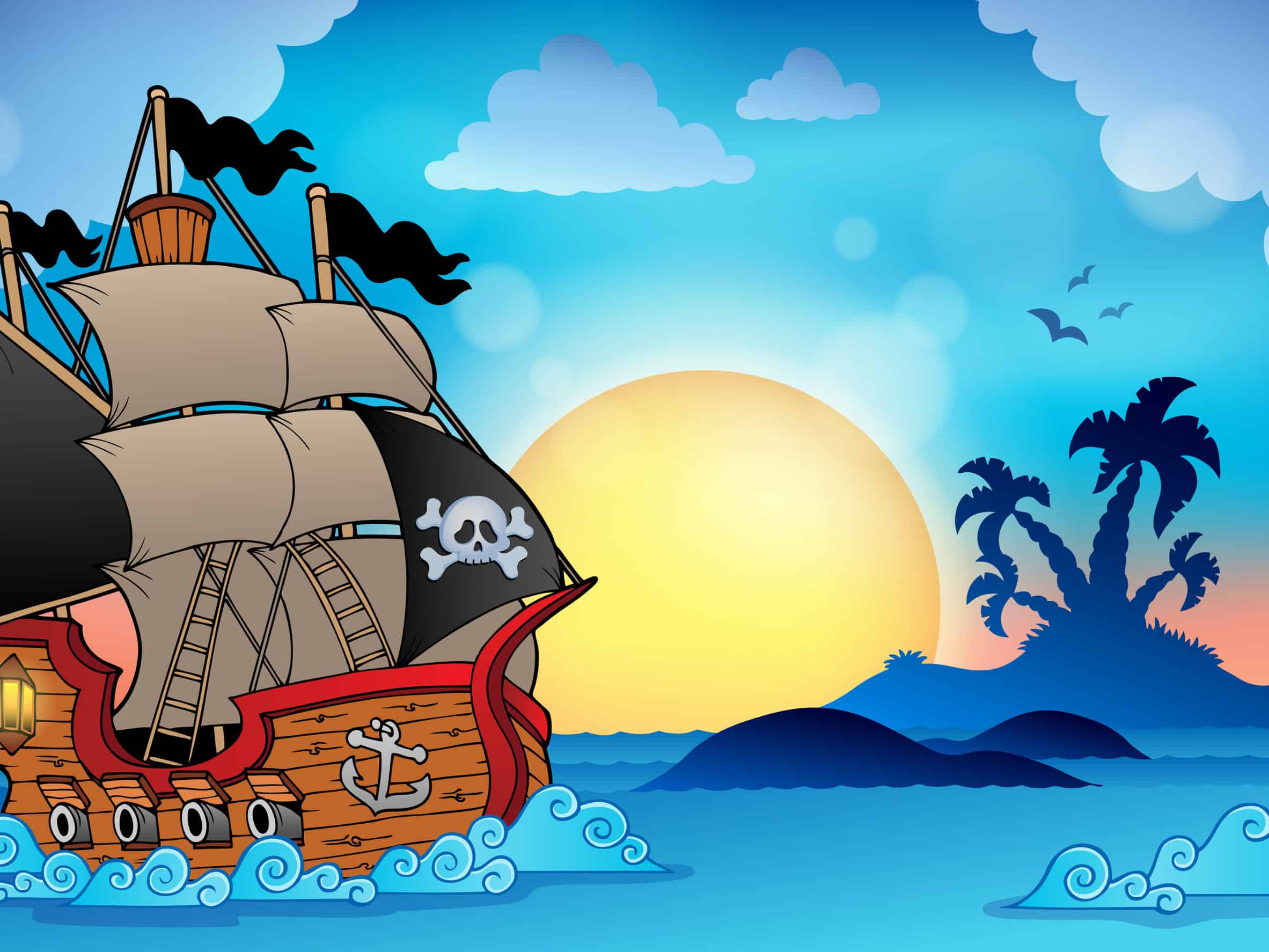 If you’re looking for some fun and enjoyable board games for your pirate themed game night, you’re in for a treat! With so many different themed board games currently on the market, we came up with the best pirate board games.

In today’s article, we’ll walk you through a brief list of the best pirate themed board games that you can find out there. These games showcase anything and everything about pirates, including ships, peg legs, swords, and the high seas.

Ahoy, Matey! Let’s dive right into some of the best pirate board games that you can bring to your next game night!

Kicking off the list with one of the most popular pirate-themed board games out there, Merchants & Marauders is a sandbox-based board game where 2 to 4 players take the helm of ships in the Caribbean.

Players get to decide whether they want to be merchants who seek victory and fortune by completing trade journeys around the sea or dreaded pirates who plunder other ships. The game lets all players upgrade and enhance their ships through their journey.

Merchants & Marauders is ideal for those who like complex and highly immersive games that can last for over 180 minutes.

Tiny Epic Pirate is a relatively shorter game but is incredibly fun and immersive. In this one, 1 to 4 players seek fame and fortune by going through an epic journey to locate and bury treasures.

Players in the game take turns to choose actions from their ship’s rondel, such as search, plunder, trade, recruit, or attack.

The game is remarkably unique and takes a reasonable amount of time, ranging from 30 to 60 minutes. The winner is the first player who manages to bury 3 treasures.

This one is an excellent adventure game for all ages. In Plunder: A Pirate’s Life, 2 to 6 players will control a pirate ship with the goal of finishing as the first pirate to get 10 points.

The game combines the elements of resource management as well as turn-based strategies to help players reach their goals.

Through the journey, you’ll get points by attacking other ships, claiming islands as yours, and burying plundered treasures. The game usually takes anywhere between 60 to 120 minutes.

If you’re looking for a relatively simple yet exciting game, you should consider giving Pirate’s Cove a try.

What’s impressive about this one is that it’s incredibly easy to learn and play. In this game, 3 to 5 players will play 12 turns.

On each one of these turns, players choose an island to conquer, if you land on an island with another player, you’ll have to go into battle against each other.

The game usually takes anywhere between 60 to 90 minutes to finish and can be played by all the family, which makes it a great choice for family nights as well as friends’ nights in!

Black Fleet is a great choice for relatively small groups because it can be played by 3 to 4 players only. In fact, players have created a set of rules that allow you to play the game with 2 players only.

The game is a tactical board game that is played with cards. Each player gets to control 3 ships of different types, which are pirate, merchant, and royal navy.

The goal of the game is for each player to work their way to save the governor’s daughter from the wicked Black Fleet villains. The game usually runs for about 60 minutes.

Rattle, Battle, Grab the Loot is one of the most interesting games on the list because it has tons of customization options that make every round truly unique, especially with the immersive and truly astonishing artwork!

The game uses a variety of custom dice as well as die-cut upgrades to let 2 to 5 players play. As the name suggests, the game is all about hiring new scurvy pirates, fighting merchants, and upgrading your ships to become the most powerful of the Caribbean.

The game takes an average of 40 to 60 minutes per round and is quite suitable for kids aged 8 years or older, but can be also enjoyed by adults.

Dead Men Tell No Tales is one of the coolest pirate-themed games that have been going around for a few years now.

This one is a cooperative game that is designed to be played by as little as 2 players and up to 5 players. The impressive part of the game is that players really need to work together in order to make the most out of the resources they have.

The common action point system makes players build their game depending on how they play it, which generates a totally different game with new outcomes every time it’s played.

Port Royal is an excellent card-based game that is all about collecting points. While playing the game, players will draw cards from the deck and they’re free to stop whenever they want. However, if you get too greedy and push your luck, you may bust out.

As you stop, you get to choose from the cards you’ve drawn, which are usually in the form of special abilities and victory points. The first player to reach 12 victory points wins!

The game is incredibly easy to learn and can be a lot of fun. You can play it with 2 to 5 players and each game should take anywhere between 20 to 50 minutes.

Forgotten waters is a crossword adventure type of game with pirate survival themes where pirates fight and plunder to stay alive.

The game features 5 different main scenarios with a huge range of twists and turns to make the replayability and value for money of this game unmatched!

The modern game doesn’t only come with a massive location book and a wide range of rules, but you can also use a free web app to save you the hassle of browsing through tons of pages.

Forgotten Waters is specifically designed for large groups of players (up to 7). However, it can also be played with 3 players. Keep in mind that this game could take several hours to finish.

Treasure Island is one of the most exciting hand management games that are suitable for 2 to 5 players. However, it’s highly recommended to play as a large group to enjoy the full experience.

In the game, one of the players takes the role of Long John, who is imprisoned and questioned about the spot where he buried his treasure.

The game takes the whole group on a unique adventure full of bluffing and secrets in a race against time to find the treasure buried in the island. The game typically takes about 45 to 60 minutes to finish.

Jamaica is a race-type board game that takes place in the Caribbean Island of Jamaica. Players take the role of pirates that are in a race to collect loot and engage in fights and duels if they land on the same spot.

The goal of the game is for one player to make it around the island while collecting the loot and goods necessary, such as gold, food, and gunpowder.

The game can be played by 2 players but is recommended for larger groups, so it’s better suited for 4 to 6 players. The race should take about 45 to 60 minutes and anyone aged 8 or higher can participate!

Despite not having any naval battles in the game, Cartagena has carved its name in the history of the best pirate-themed board games on the planet.

In this game, the pirate crew is locked up in a prison where they work together to break out of it. This updated version of the game adds new elements to the award-winning classic, such as the Black Magic variants that provide the players with special abilities that can also help them through their journey.

Cartagena is played with 2 to 5 players and can include kids of 8 years or older. The typical game should last about 45 minutes.

Friday is one of the most affordable pirate themed board games on the market. However, that doesn’t stop it from being an incredibly fun game to play!

The game is based on the popular Robinson Crusoe novel by Daniel Defoe where you play as “Friday” who is helping Robinson to survive and fight against the two pirate ships to escape the island.

The game is specifically built to be played by one player, so it’s an excellent choice to spend some of your free time with a rewarding experience! The game typically takes about half an hour to finish.

Final Thoughts on Pirate Board Games

There you have it! A brief guide with the best pirate themed board games that you can find on the market!

As you can see, there’s a huge variety of options when it comes to pirate themed board games, so you can rest assured that you’ll find the ideal one for you on that list!

Love dinosaurs? Check out our article on our favorite dinosaur board games.